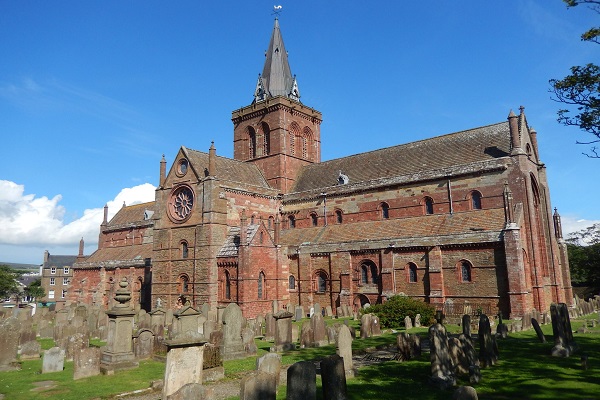 Set in the heart of Kirkwall, the capital city of the Orkney Islands, it is a place of stillness, of inspiration, of warmth, and is steeped in the presence of God.

The worshipping community over the centuries has been part of the Roman Catholic Church, the Norwegian Church, the Scottish Episcopal Church, and the Church of Scotland (Presbyterian). The worshipping community thus inherits an ecumenical tradition. Today, in addition to our local congregation, worshippers come from a whole host of denominational backgrounds and none.

Between 1154 and 1472, Orkney was ecclesiastically under the Norwegian archbishop of Nidaros (Trondheim) and after that it became part of the Scottish province of St. Andrews. The Cathedral was assigned to the inhabitants of Kirkwall by King James III of Scotland in a charter dated 1486. One of the most notable bishops was Bishop Robert Reid who held the see of Orkney between 1541 and 1558.

The Reformation brought ruin to many cathedrals but St. Magnus Cathedral seems to have emerged relatively unscathed, although the organ, treasures and rich vestments were removed and the wall decorations were covered in whitewash.

In 1845 the Government presumed the ownership of the Cathedral, expelling the then congregation and carrying out major restoration work to the fabric of the building.

In 1851 the Royal Burgh of Kirkwall re-established ownership of the building and the choir and presbytery were fitted with new pews and galleries for the reinstated congregation.

The Cathedral slowly deteriorated until the early 20th century when The Thoms Bequest made further major restoration possible. Between 1913 and 1930, the main alteration to the exterior of the Cathedral was the erection of a tall steeple which replaced the low pyramidal roof of the bell tower.

Internally, the screen separating the choir from the nave was removed, along with the pews and galleries. Stained glass windows replaced the formerly plain windows, much of the floor was tiled and the warm red sandstone was revealed by the removal of plaster and whitewash.